84 teams from all parts of Northern Ireland originally entered the quiz and 8 finalists from the regional heats were invited to the final, 22nd February. The final took place in the Titanic Suite, Titanic Belfast and was hosted by quizmaster Barra Best. The quiz format included a table quiz knock out of 6 rounds of written questions – this took the 8 teams down to 4 teams. The semi-final heat involved 6 rounds of buzz-in questions with Brownlow Integrated College beating off Portora Royal to go into the final heat against Lumen Christi.

Brownlow Integrated College team consisting of Beth Martin, Matthew Wheatley, Aaron Hylands and Amy McClelland performed amazingly well and took the lead early on in the final heat to become outright winners for the final trophy and prize. Pupils were presented with a beautiful Waterford Crystal Trophy on the evening to mark their success.

A big congratulations to the pupils involved – they were a credit to our school! And a big thank you to parents and friends who joined us on the evening to show their support. It was an amazing night, thoroughly enjoyed by all who attended.

A big well done to all the schools involved in this first STEMQUEST Quiz and a big thank you to Titanic Belfast for organising what was a fantastic event for all involved. 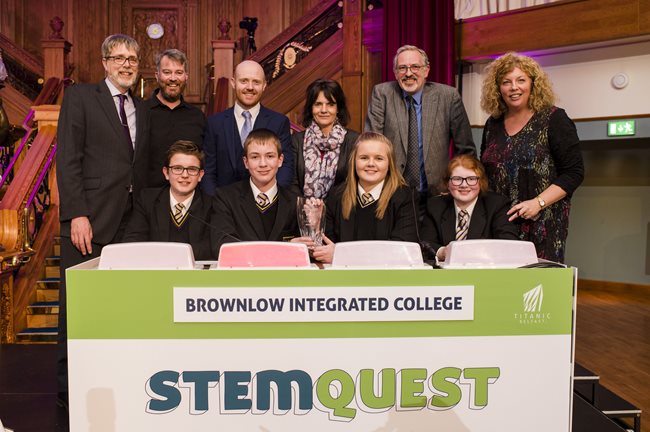